You are here: Home / Board Games for “bored” children

On-line shops have had a run on board games and so they can be difficult to find. For centuries, however, people made their own. Here are a couple of examples:

The Royal Game of Ur – a sort of cross between “Backgammon” and “Sorry” which had world wide popularity, … in the days of the Babylonian Empire. Although normally played by two people more could be added if you can improvise more than 2 sets of seven counters (ideally something small and/or flat). The rules are easy enough for children but there is a little startegy that can liven things up. Click the image to download the board and simple rules. There are plenty of examples of how to play on YouTube, just avoid the ones where they deliberately overcomplicate the rules! 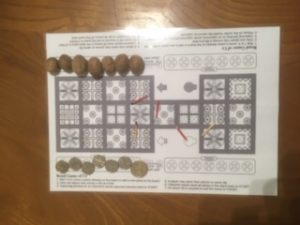 Nine Mens Morris – still pretty old (Roman) but with a simpler board: You can find the rules here https://www.mastersofgames.com/rules/morris-rules.htm or if you prefer a video click the image of the board.  You don’t need to buy a fancy board, the Romans often gouged their’s into floors and pavements, but a pencil and paper is easier and more considerate. 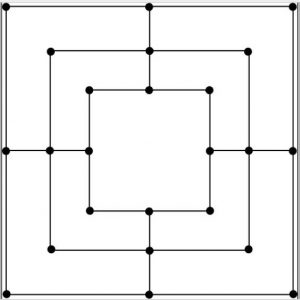